There are interesting development in the energy sector as shown in these three recent BusinessWorld reports: “Gov’t return to power generation should not be ruled out, former official says” (July 25); “‘More equitable’ net metering needed for solar” (July 26); and, “Hike in net metering rates to raise power cost — Meralco” (Aug. 2).

Story number one is about the opinion of Monalisa Dimalanta, former National Renewable Energy Board chairperson, who supported an earlier proposal by Energy Secretary Alfonso Cusi that government should consider going back to power generation. They want to amend the Electric Power Industry Reform Act (EPIRA) law of 2001.

Story number two is about the opinion of Richard B. Tantoco, President of the Energy Development Corp. (EDC) that houses with solar rooftop and who dump their excess solar output “at P4/kilowatt-hour (kWh), but purchases electricity from his DU (distribution utility) at almost thrice the price or P11/kWh” should be compensated at a similar purchase price.

Story number three is an intelligent comment and reaction by Meralco Vice-President and Head of Utility Economics Lawrence S. Fernandez, that “any increase in compensation to net metering participants will automatically mean a higher generation charge.”

The opinion and lobbying by Ms. Dimalanta coincided with another lobby at the House of Representatives for House Bill 9544 creating the Philippine Renewable Energy Corp. (PREC). So, certain groups in government want a double violation or change to the EPIRA law, first with continued government control of hydro power plants in Mindanao, resisting their privatization, and, second, to make government go back to power generation.

The opinion and lobbying by Mr. Tantoco neglects the fact that the export or dump energy from rooftop solar is not the same as the cost of power from DUs. Dumping power to the utility when the utility may not even need it is not the same as power consumed from the utility when the consumers actually need it. Plus, there are many charges on top of transmission, distribution and system loss charges, being slapped by the government to the final price of retail electricity — universal charge for missionary electrification and old National Power Corp. debts, taxes national and local, feed-in tariff allowance for intermittent renewables, subsidies for “lifeline customers.”

The repeated lobby to amend the EPIRA law for the worse because “EPIRA is not working for the consumers and the economy,” is not based on hard data.

For the accompanying table, I used data from the Department of Energy Power Statistics 2020. I use 2003 as the baseline since private sector involvement in power generation remained near zero as the law’s implementing rules and regulations became effective only in March 2002. Then the changes after six years, so 2003, 2009, 2015, and the last available data 2020. Then I computed the percentage changes from the prior period (see Table). 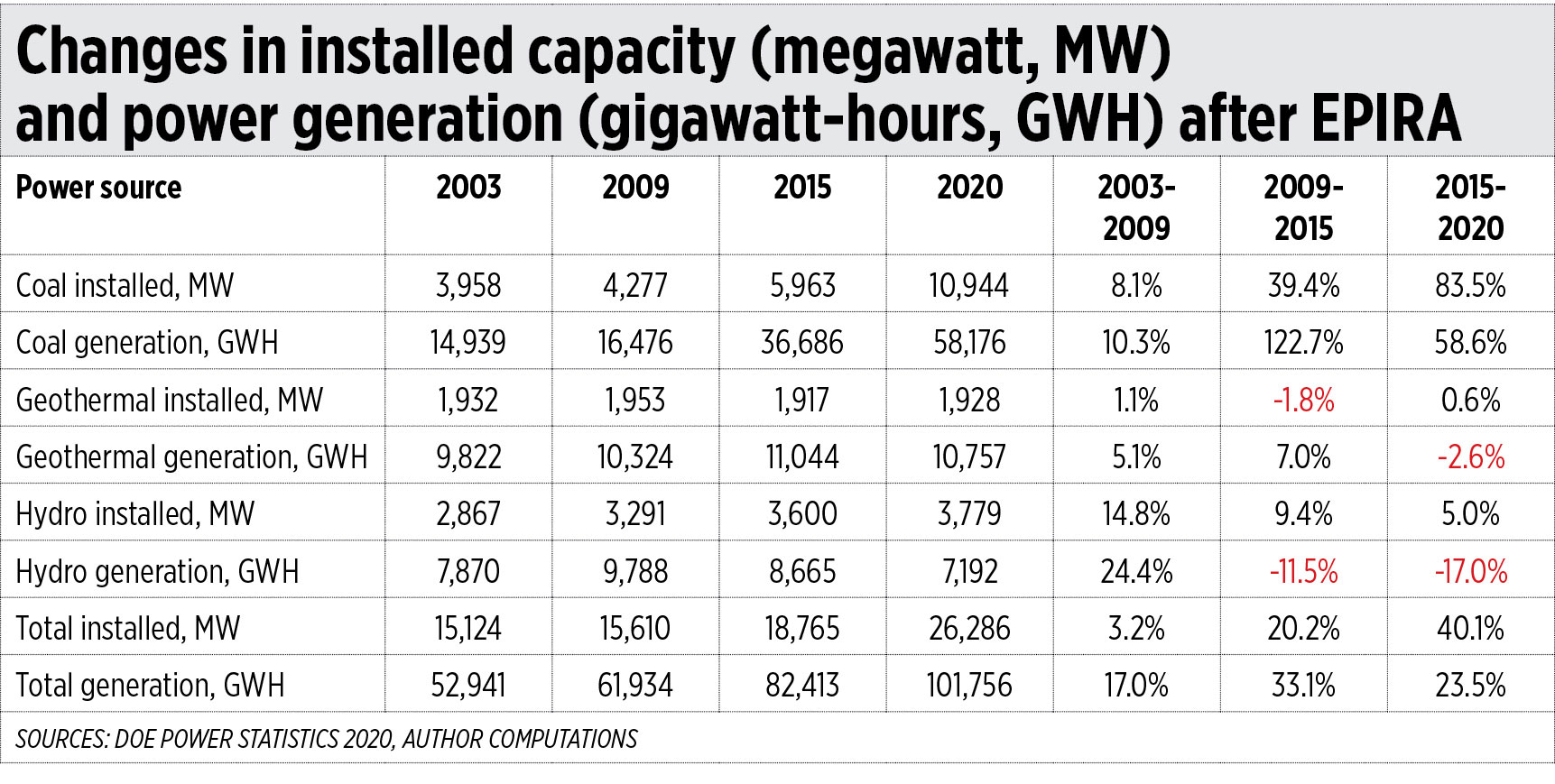 The numbers show the following:

Three, from 2015 to 2020, with business confidence in the generation sector at full blast, installed capacity increased by 40% (power projects approved during the Benigno Aquino administration and which began operation during the Duterte administration) although power generation increased only by 23.5%. The main reason for this is that many recent additions were wind-solar which have a low-capacity factor of only about 25% and 18%, respectively.

Five, such declining efficiency and power supply of government-owned hydro plants in Mindanao despite rising demand was the main reason for the daily “Earth Hour” blackouts there until about 2015. By 2016-2017, lots of new coal plants were commissioned in Mindanao and the blackouts were gone. Coal generation in Mindanao was zero in 2003, then provided 1,563 GWh in 2009, 2,038 GWh in 2015, and 9,904 GWh in 2020.

There, EPIRA has worked, is working, and will continue to work for the consumers. More generation competition via continued privatization, more retail competition and open access, more contestable customers shifting from captive or no choice customers, more retail electricity suppliers competition.

One result is that in both WESM (Wholesale Electricity Spot Market) and DUs, electricity prices have been declining through time. For instance, Meralco prices declined from P8.19/kWh in January to June 2020, to P7.92/kWh in January to June 2021, a 3% decline, mainly due to lower generation charges. Power generation competition continues to benefit customers and end-users.

The Energy department and Congress should resist the temptations and the lobbying for government to go back to power generation, to create another government power corporation, and raising electricity prices by subsidizing the rich with rooftop solar power. The proposed creation of a Philippine Renewable Energy Corp. should not be entertained.